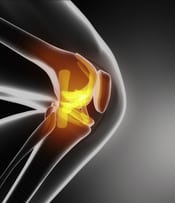 Symptoms of a Tibial Plateau Fracture

Symptoms of a tibial plateau fracture may include:

If the foot of the injured leg appears pale in color or cool to the touch, it may be a sign that blood circulation is impaired.

Diagnosis of a Tibial Plateau Fracture

Complications of a Tibial Plateau Fracture

Severe swelling of soft tissue caused by a tibial plateau fracture, may cause a rare and serious condition known as compartment syndrome to develop. Compartment syndrome can affect the blood supply to the muscles and nerves in the leg and foot. This condition may require an emergency surgical procedure, known as a fasciotomy. During a fasciotomy, incisions are made to release the skin and muscle coverings and reduce swelling.

Treatment of a Tibial Plateau Fracture

Treatment for a tibial plateau fracture may vary based on the severity of the injury and may include:

A displaced tibial plateau fracture may require the broken bones to be realigned, prior to casting. Depending on the degree of displacement, surgical or nonsurgical methods may be used to manipulate the bones back into position. Severe or multiple fractures may require external fixation, which uses an outer metal rod and pins to hold the bone or bones in place until they heal. Internal fixation devices, including plates, rods or screws, may also be used to maintain proper position of the bone during healing.

Weight bearing activities may be extremely limited while recovering and it may take up to 3 months of healing before full weight bearing can be done safely. As the bones heal, physical therapy is recommended to restore normal muscle strength, range of motion, and stability.