Tendon Transfer in the Hand 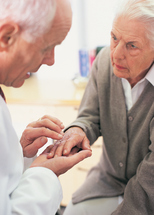 Tendons connect muscles to bones, allowing muscles to function. When there is damage to the tendon that helps a particular muscle to function, the muscle is essentially paralyzed and can no longer be used. Tendon transfer is a surgical procedure that takes a healthy tendon from one area of the body and attaches it in an area that is no longer functioning. In the hand, tendon transfer is often used to treat tendon damage that has been caused by nerve injury, muscle rupture or nervous-system injury.

Only a healthy, well-functioning tendon with a good blood supply is used for transfer. It must be taken from an area in which the tendons that remain can still provide the function the transferred tendon was providing. During the tendon-transfer procedure, which is performed on an outpatient basis, two incisions are made: one to access the tendon being transferred, and one to access the area in which the tendon will be attached. The healthy tendon is then rerouted to the new attachment site, where it is secured with stitches to the targeted bone or tendon.

After tendon transfer surgery, a splint or cast is worn for up to 2 months to keep the tendon immobilized. After the splint or cast is removed, physical therapy is usually necessary in order to restore full range of motion.