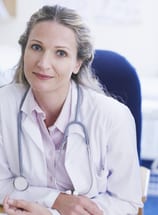 In a relatively new approach to minimally invasive surgery (MIS), the da Vinci® system applies robotic technology to various types of surgery. Although laparoscopic surgery is also minimally invasive, it limits the surgeon to rigid and fairly restricted movements. The da Vinci surgical system offers flexibility and control, and permits precise, effective results in a wide range of surgical procedures, including those used in treating cardiac, colorectal, gynecologic, head and neck, thoracic, and urological problems.

According to its manufacturer, Intuitive Surgical, the da Vinci surgical system, in addition to the benefits discussed below, offers patients a shorter hospital stay and reduces their need for narcotic pain medication.

The da Vinci system uses several tiny incisions rather than one large one, which means less scarring, less pain, less bleeding, a more rapid recovery, and a smaller incidence of postoperative infection.

Although the robotic arms of the system's console carry surgical instruments and a camera to the targeted area, the procedure is under the complete control of the surgeon. Using EndoWrist technology, the robotic arms precisely mimic the movements of the surgeon's wrists and hands, providing superb dexterity and extreme control.

The surgeon is able to view the targeted area through the an imaging system that provides a magnified, three-dimensional view of the entire operative field. This provides a clearer and more detailed view than that from traditional open surgery.

The da Vinci system can be used in many types of surgical procedures, including cardiothoracic, abdominal and prostate surgeries. In these and other procedures, the control and accuracy the system provides may result in better outcomes than those from conventional surgeries.

According to Intuitive Surgical, the possible risks of MIS in general include the following:

If a surgeon needs to switch from MIS to another type of surgery during the procedure itself, the time a patient spends on the operating table and under anesthesia may increase, and additional complications may result.

Although the da Vinci surgical system offers significant advantages over traditional surgery, it is not the appropriate choice in every case. Pregnant women, and those who bleed easily, have issues with blood clotting, or are morbidly obese, are usually not suitable candidates for any type of MIS.