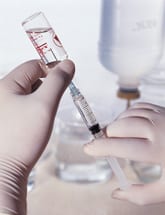 Prolozone® therapy is an alternative, nonsurgical treatment that may be used for all forms of musculoskeletal and joint pain. It involves injection therapy of collagen-producing substances and ozone gas into the patient's connective tissue. Such injections have been shown to result in the reconstruction of damaged tissue. Prolozone therapy is an improvement over traditional prolotherapy because of its use of ozone, a substance that stimulates the body's ability to repair joints. Prolozone is used more commonly in Europe than in the United States.

Prolozone is used as a homeopathic remedy for chronic musculoskeletal pain resulting from injury or disease. It is a desirable alternative to more invasive treatment for:

Prolozone has been shown to have a very high rate of success in permanently relieving chronic pain. It is also sometimes used as an alternative treatment for a wide variety of conditions, including diabetes, heart disease, Parkinson's disease, macular degeneration, cancer, and even dental problems.

Ligaments, the bands that attach bones to other bones in the joints, have a great many nerve endings, so ligament injury results in intense pain. Once ligaments have been injured, they cannot regain elasticity on their own because they have a limited blood supply. Prolozone permits increased blood flow to the affected area, interrupting the cycle of pain and inflammation. This increased blood flow provides the damaged tissue with improved nutrition and hydration, both of which promote healing. In this way, partially torn connective tissue and ligaments are repaired, increasing range of motion and lessening pain.

In its use for non-musculoskeletal disease conditions, prolozone is believed to increase the antioxidants in the body, helping to fight off invasions by bacteria, fungi, viruses, and even protozoa.

There are three simple steps to the prolozone therapy procedure. First, the patient is injected with a local anesthetic combined with a tiny dose of an anti-inflammatory. Sometimes, a drop of corticosteroid is included in this injection. The doctor moves the needle around the injection site to make sure the solution reaches the entire area.

Next, medical ozone is introduced to promote healing. After the injections have been administered, the site is treated with a low level laser beam to strengthen the repair.

There are several advantages to prolozone over conventional prolotherapy, including

Prolozone therapy is also much less costly than traditional prolotherapy.