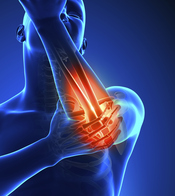 A radial head fracture is diagnosed through a physical examination and the doctor may attempt to move the arm into different positions. X-rays are performed to determine the degree of displacement and the severity of the fracture. CT scans may also be performed, and after a review of these images, an appropriate treatment plan is developed.

Treatment for a radial head fracture varies based on the severity of the fracture but commonly includes medication to control pain and swelling. If the radial head fracture is small, resulting only in cracks to the bone, treatment may only involve using a splint or sling for a few weeks while the bone heals. Severe breaks may require surgery to insert pins or rods to hold the bones together to promote healing. In some cases, arthroscopic surgery may be performed to:

In severe cases, when the radial head bone has broken into multiple pieces that cannot be put back together for healing, a procedure known as radial head replacement may be performed. During this procedure, the deformed radial head is surgically removed and replaced with a prosthetic radial head. This surgery may be performed to improve long-term function of the elbow. Physical therapy is necessary after all forms of treatment for radial head fractures, and may include exercises to restore muscle strength, range of motion and flexibility.